How well do the different types of Buffalo Grasses grow in shade? Matilda Turf and Sapphire deliver the best results.

The shade element of this project was designed as a pilot study to investigate the effects of differing levels of shade on leaf dry weight production, turf quality and sward height of eleven commercially available buffalo grass cultivars. This particular study has the potential to modify the use of grass in shaded areas where all too often inappropriate choices are being made based mainly on price rather than adaptation and use. 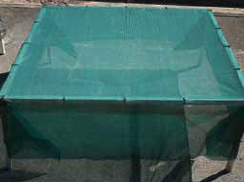 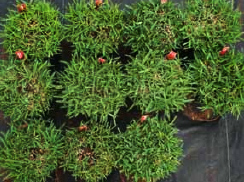 This experiment was conducted at Redlands Research Station (27º32’S lat, 153º15’E long, 25 m above sea level), QLD in plastic pots (175 x 130) mm containing a fertile red volcanic ferrosol (Isbell 1996) soil (170 mm) with a thin 15 mm basal gravel (5 mm) layer to ensure adequate drainage. The eleven cultivars (Table 7.1) evaluated in the trial were collected from an old Plant Breeders’ Rights (PBR) trial on Redlands Research Station from 8-9 May 2008. Plant material was cut from the old PBR trial site to fit the size of the 175 x 130 mm pots being utilised. The pots were maintained in the field under industry standard practices (fertiliser, irrigation and pest and disease control) for a period 3 months prior to the commencement of the experiment in March 2009.

Pots were hand clipped using scissors at fortnightly intervals prior to the commencement of the experiment beginning on 2nd March 2009. On this date the pots were trimmed to the thatch surface. Sward height was recorded using digital Veinier callipers prior to clipping. The height was measured from the top of the thatch surface and recorded as an average leaf growth height across the surface of each pot. The first assessment of turf quality, sward height and shoot dry weight production occurred on 16th March 2009. Clippings were taken such that all new growth was removed, collected and dried in a fan-forced drying oven at 650C for 24 hrs. After drying the clippings were weighed. and a figure in grams per square meter to be ascertained for each cultivar. The shade test was conducted on the buffalo cultivars using test plots shaded by varying amounts, with a control plot for each buffalo in full sun, plots of each cultivar were place under 30%, 50% 70% and 90% shade and the growth rates were measured after 14 day intervals. the average growth across all cultivars was 2.98g/m2 for full sun, 2.87g/m2 for 30% shade, 2.25g/m2 for 50% shade and 1.73g/m2 for 70% shade. We have not shown the results for 90% shade tests as no cultivar was of an acceptable level for this test and would not be a good choice for lawns experiencing 90% or above shade levels.winter-colour