Soft leaf buffalo grass cultivars (St Augustinegrass - Stenotaphrum secundatum) have been subjected to minimal evaluation of their wear tolerance levels. In Australia, the current knowledge bank in this area is primarily ‘anecdotal’ and in the majority of cases derived from sources that have a vested interest in the individual cultivars.

This experiment was designed to evaluate the tolerance of a number of buffalo grass cultivars to wear and their recovery time from the wear imposed. Wear was imposed in a manner that was believed to simulate the wear experienced by lawns in a domestic situation e.g. children playing, pets, general foot traffic, postal deliveries etc. Two simulated wear trials were undertaken in May and August 2008 to assess the performance of 14 buffalo cultivars for wear tolerance and compare them with the wear tolerance of other commercially available turf species.

This experiment was conducted at Redlands Research Station (27º32’S lat, 153º15’E long, 25 m above sea level), QLD on a fertile red volcanic ferrosol (Isbell 2002). The experimental area was situated under a shade structure that provided 50% shading. The site was maintained under industry standard practices (fertiliser, irrigation and pest and disease control) and mown regularly (35 mm) to simulate a home garden situation. The experiment was a completely randomised block design incorporating 14 buffalo grass cultivars with 4 replications. Individual plots were 3.0 x 0.75 m.

Trial 1 consisted of the wear treatment being applied to each plot three times a week (Monday, Wednesday and Friday) commencing the week of 5th May 2009. This continued for a period of four weeks.

Visual assessments of turf quality (0-9, 0=worst and 9=best with >=6 being acceptable) were made on a weekly basis by two independent assessors in the worn and control plots for both trials. All data was analysed via the standard Analysis of Variance (ANOVA) using Genstat 11th Ed. (2008). Comparisons of means were made using Fischer’s protected Least Significant Difference at a 5% (p=0.05) probability level. Line graphs were constructed using SigmaPlot for Windows Version 5.1

Trial 2 consisted of twice weekly treatments (Tuesday and Friday) for a period of 9 weeks commencing 5th August 2008. Heavy rain during the week 16th September 2008 (week 7) resulted in no wear being imposed or quality assements being undertaken for that week. Visual assessments of the percentage of bare ground in the worn plots were made for Trial 2 only on a weekly basis from week 2 by two independant assessors in the worn and control plots. after week 9 no further wear treatments were undertaken and recovery times were noted. 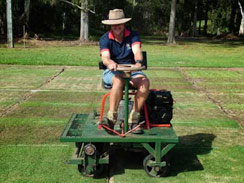 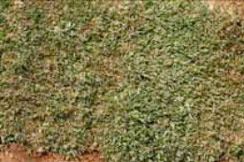 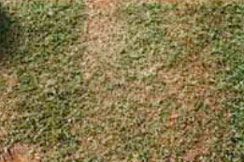 From the table above it is easy to see that Matilda is very tolerant to wear compared to the other cultivars followed by Kings Pride, Matilda observing minimal damage in week 8 of the test only to return to 0% for week 9, Kings Pride performance is also good here taking only 1 extra week to recover over Matilda. Sapphire performed the worst in this trial from the cultivars listed above, there were many cultivars below Sapphire however. If wear is your primary concern based on this test alone Matilda or Kings Pride would be the choice of the bunch.